So I have always been into Nail Art and recently someone wanted some inspiration for Festival themed nails, which prompted me to upload all the picture I have. I'd rather people copied them or used them for inspiration rather than just sit on the hard drive of my computer :) 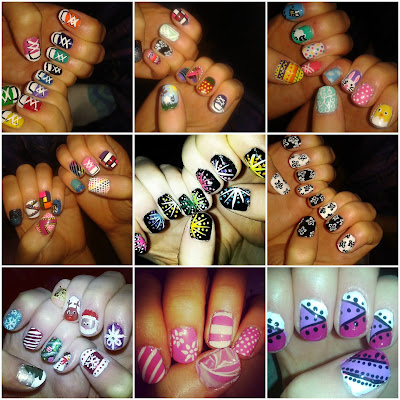 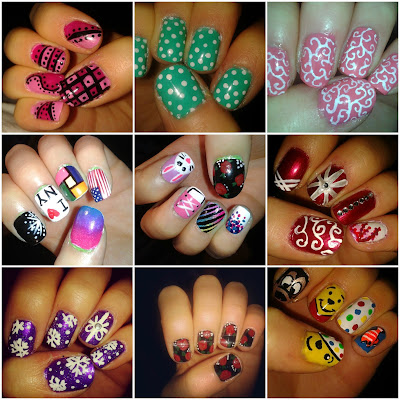 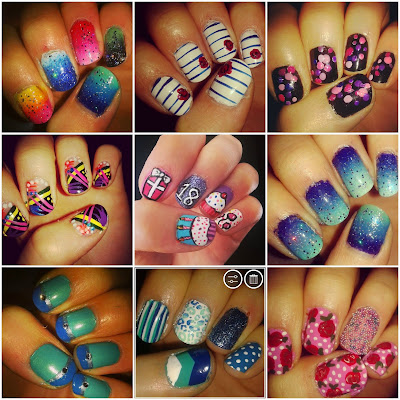 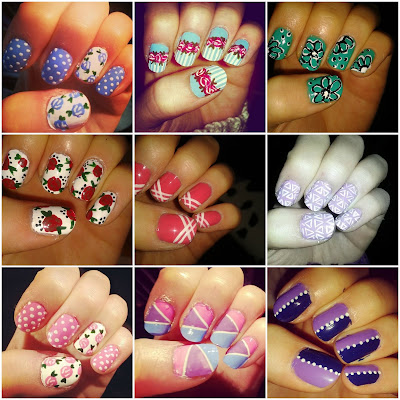 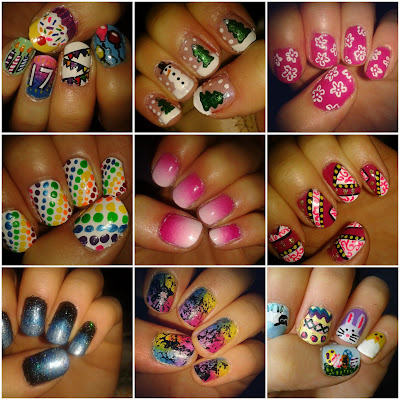 There's been a lot going round about the Twins in Pretty Little Liars and whether any of the characters are or were a twin.

We first heard about the twins in a flashback of Hanna, Alison and a kid Hanna was looking after in Season 2 Episode 13 where the story Alison tells depicts twin girls playing with dolls, when suddenly the both choose the same doll, then when one wins and pulls it, the other twin goes to the drawer and stabs her. 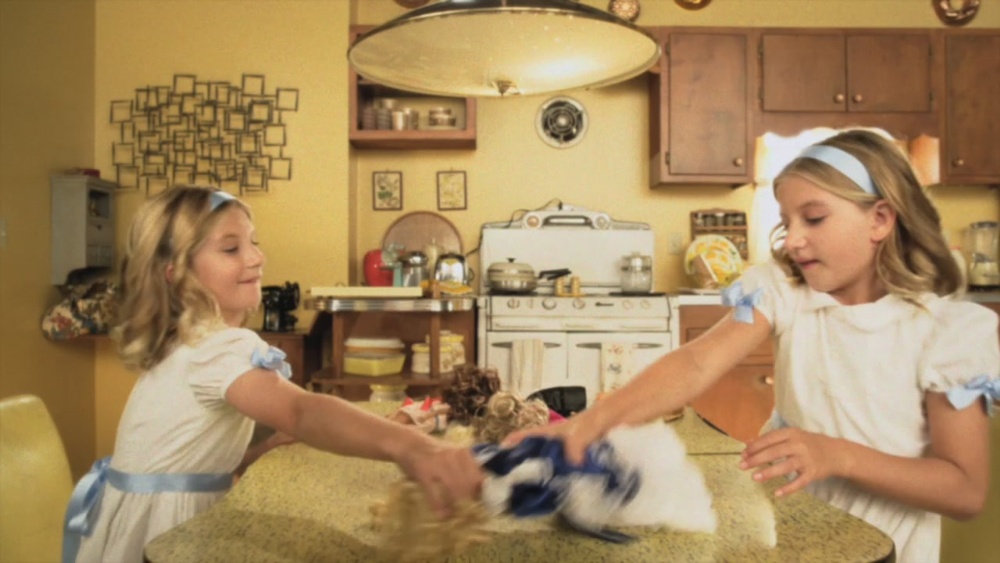 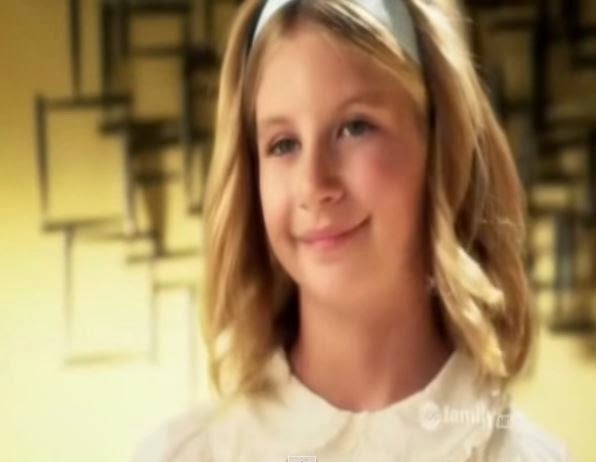 They look an awful lot like this girl which Ashley Marin suspects is a ghost as she seems to disappear and reappear in different rooms. The little girl tells Ashley about how she wants to ring her mum and how she fights with her sister "About everything, even our dolls"
Coincidence? I think not.

I haven't though about who the twins could be yet although Alison's story mentions how the girl was sent to a mental asylum which could link to Bethany Young?

It's not the first time we see dolls either is it? The girls all have doll versions of themselves in A's lair...
Posted by Clare Louise at 15:21 No comments:

15 Reasons to why Aria is A Pretty Little Liars


After reading PLL theories online and I read one where they thought Aria was A, now I have read it I can't unsee it as I feel there are so many subtle and unsubtle clues as to why.

Clues (In no particular order, just the order I think of them)

1. The intro song. The very first time I watched the show before I knew who any of the characters were the first thing I though was that Aria was the main character as she is the one it focusses on where she puts her finger to her lips. Of course as the show progresses she is equal to Hanna, Spencer and Emily, or is she? 2. Aria's handwriting is the same as A's. Season 3 Episode 13 when Aria introduces herself to Adam Lambert by writing her name in the condensation in the window, doesn't the final A look familiar? 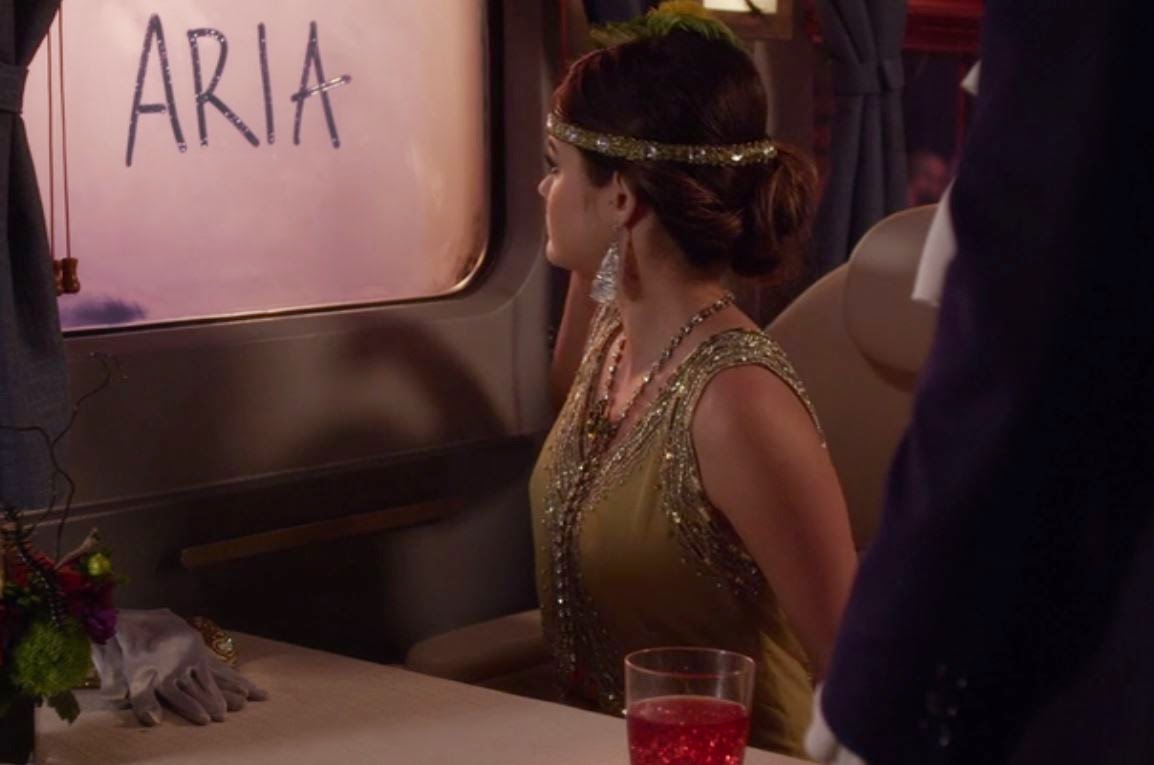 3. The most recent promo (21.02.15) for PLL ends with an animation of glass shattering and drawings of the girls and Toby. Aria on the left hand side has her finger on her lips like in the intro to the show, and whats that painted above her? 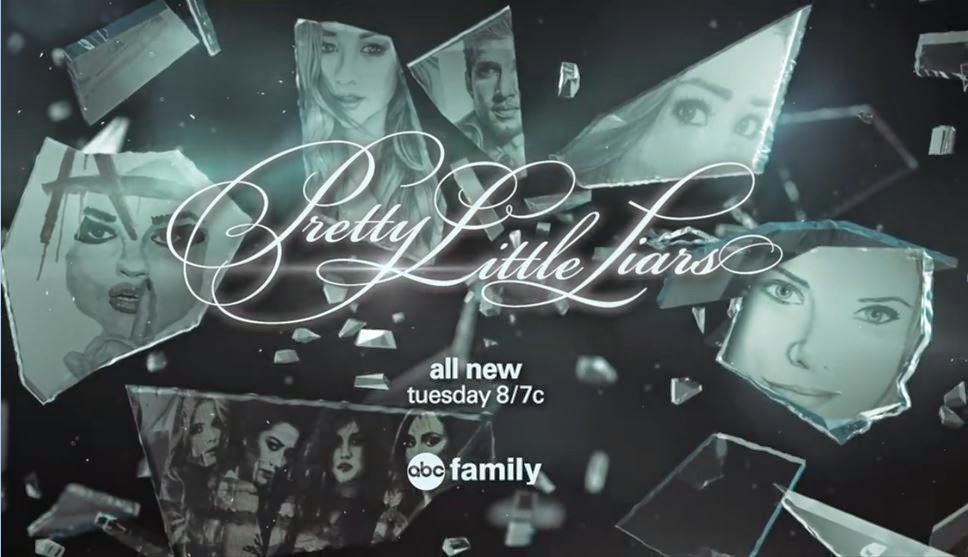 4. On the broken glass theme. In Season 3 Episode 16 when Meredith locks Aria in her room, Aria smashes a Mirror to protect herself with a shard, but we get a camera angle from above where we can see Aria in the broken shards. Look familiar? 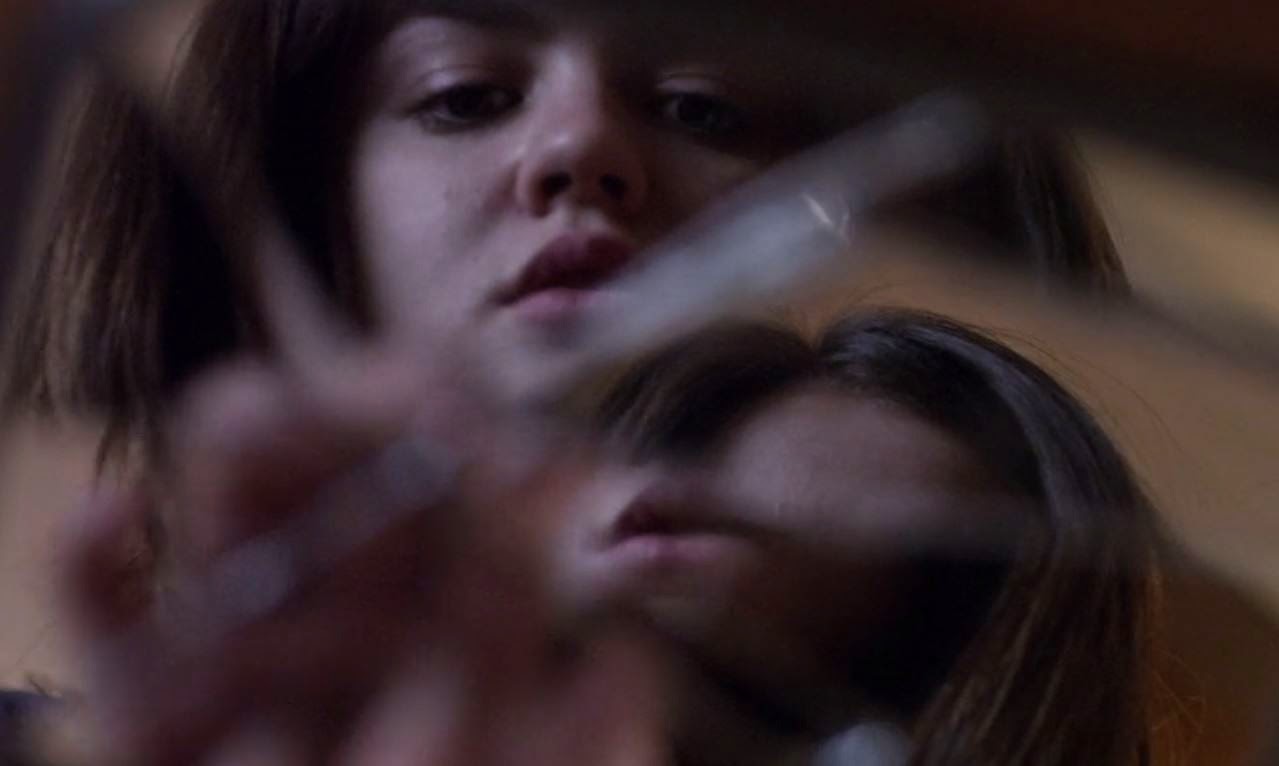 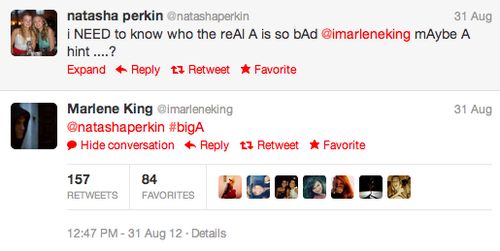 7. Linking with the above, the recent promos have called it a "Big A reveal" and which dolls shoes do we see closest to the message? Arias. 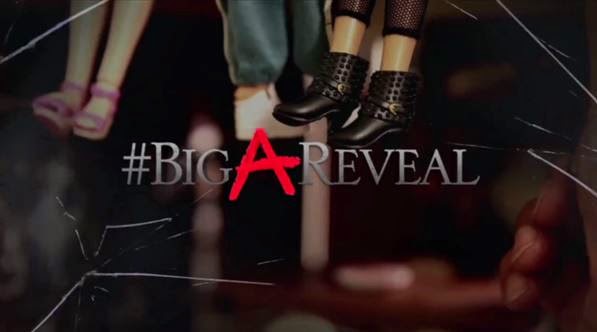 8. With the dolls theme, look closely at the dolls clothing. In this photo Alison is above, then the dolls in order represent Aria, Spencer, Hanna and Emily, notice how Aria doll is wearing a black hoodie?

9. Whilst looking for pictures I stumbled across this which is clever. So we know some A team members and suspects were; Mona, Toby, Ezra and Alison. If you take the first letter from each name and add in Aria, you get A TEAM.

10. I think this one is perhaps more coincidental, but is still a good point! credit to ariakilledali.tumblr.com 11. The A texts didn't start until Aria came back from Iceland. Alison had been missing for a year so why then? 13. How many different phones does Aria need? 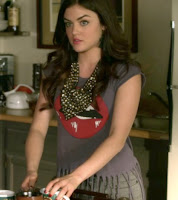 15. When Mona was in Radley she used code to say a message with the first letter of each word. Was it a coincidence that she turned MAYA KNEW into "Miss Aria You're A Killer Not Ezra's Wife"? Posted by Clare Louise at 15:08 No comments:

How to pass a Disneyland Paris Audition 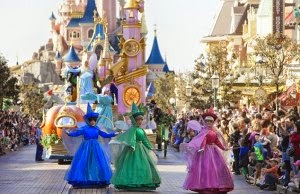 
Dancing down Main Street with the iconic castle behind you smiling and waving at cheering crowds is a feeling that can only be compared to that of stardom.
Seeing the joy you bring to children and adults as you single them out for a high-five and the looks of utter amazement are what makes the job one of the best on the planet.
But how do you get there?

I am one of the lucky ones to have gone to a Disneyland Paris audition and got right through to dancing on the parade within 18 days.

Remembering how many web pages I scoured and videos I watched online made me create this guide from the perspective of an actual employee rather than someone who didn't quite make it.


Some CDI or CDD contracts are handed out there and then but i'm not sure how they work as that wasn't offered to me, I also didn't do the wig and makeup fitting either incase you were wondering :)

Here is a link to a video which shows a bit of the dance (its in french though - but if you pass you'd better start practicing your french!)

TIPS AND ADVICE (As thought up by my friends and roomate)

·         Think outside the box. (Don’t do what everyone else does, like when being a dwarf don’t be sleepy or grumpy)
·         Energy
·         Enthusiasm
·         Villians do Scar *You don't HAVE to do this but this was suggested by someone who means don't do the obvious
·         Smile the whole time
·         Facial expressions are a must and try and drastically change them for each character in the animation round to show your versatility
·         Don’t dress as the characters – This one is a strange one, as my roommate dressed as one character but got another, but also at my audition there were people who were just far too much like the characters and didn’t get through the first round, but then again one of my friends were telling me someone came as Aladdin and got it so I guess its a touchy one, but personally I wouldn’t do it, just be yourself (but just a more friendly over excited happy version)
·         Wear something bright and noticeable
·         Push yourself to the front but not at the very front if that makes sense. You want to be noticed but it is Disney and everyone is really nice so don’t be too pushy. And also this can sometimes backfire as I learnt when I went right the front, did the first run through when they split us in half and tripped over infront of everybody and sprained my foot.
·         Visualise actually doing it on Parade in Disneyland Paris infront of a load of smiling kids and think about how you would perform to them, keeping them entertained with their parents taking photos making you part of their holiday album and making a magical experience. 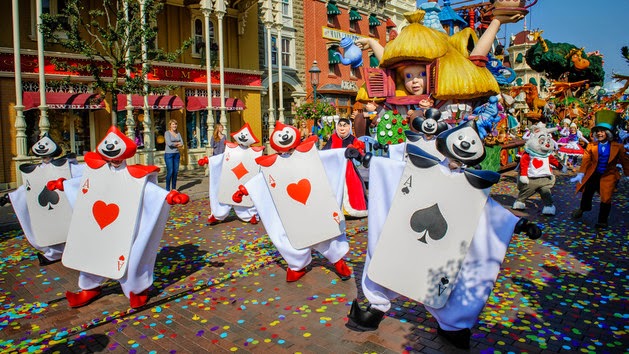 But sometimes no matter how hard you try you’re just not what they’re looking for and it is really tough to specifically say what they are looking for. To be honest (and one of my closest friends I made there is in the same position and she has never danced before in her life) we were both amazed we got through the audition, especially since we were both 18, just left school and have had no professional training.  Don't let people bragging about their training and backgrounds knock your confidence. I had 2 years of dance classes and a few amateur performances up my sleeve, but we think the reason we got through is because we can act and dance to a reasonable standard, are the right height and have the right level of animation needed. But saying that we still got the job alongside people who have been to Urdang, Italia Conti and all those big drama and dance schools.

At the audition i went to there was a girl who was there for the 7th time after clearly not being succesfull. She was one of the ones that tried far too hard though and came across as really fake as she was right at the front the whole time demanding to be seen. She got cut in the first round and then proceeded to watch the dance audition from the window, then went in afterwards to ask why she got cut and I think they just asked her to try again.

And as for the heights thing – welcome to Disney, everybody is the wrong height.
Its more the height they want you to be than what you actually are. In real life I am about 174cm but my “Disney Height” is 170.

"Someone said if you go wrong in the dance audition you are automatically cut"
Of course you need to aim to get it right but don't worry. My audition wasn’t awful but it certainly wasn’t good and I only got about 60% of the choreography right. My friend (who has never had a dance lesson in her life) was telling me she could do the first 2 bars of the dance and not much more so just repeated that over and over for the whole thing, she got through and we both do the parade. It's the facial expressions that got us both through (we think) as we looked like we knew exactly what we were doing and loving every minute of it. Your face is probably more important in the dance round as you can be taught how to dance, not how to enjoy yourself, the companies ethos is to create a magical experience and this is portrayed mostly though your face. 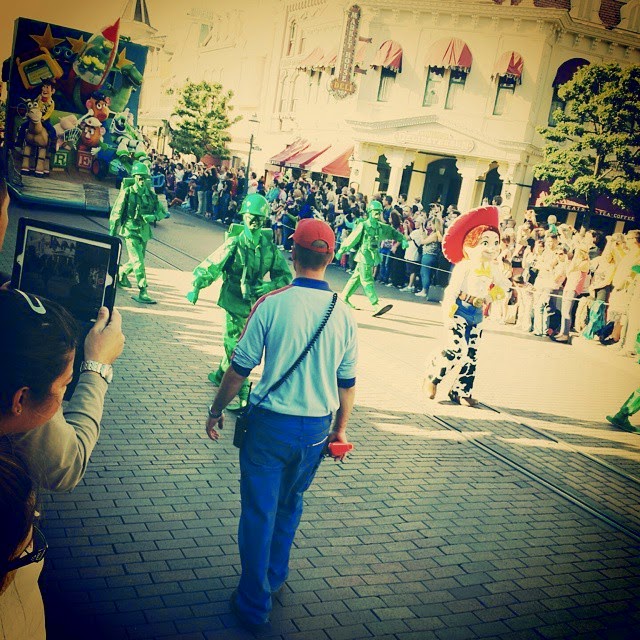 When it comes to the Parade, everybody dances on it and the cast changes daily depending on what you can do. You get “repped” (taught) something within a month or so of starting and then you gradually build up your repertoire, as my contract was rather short (3 months) the only thing I was repped for was Green Army (Toy Soldiers in Toy Story) and as it is all I could do it is what I did pretty much everyday. As well as the dancing roles there are of course the characters on the parade, and the only ones you do will be the ones in your height range. For example a boy I know has been there for a year or so and in one week alone he has done Prince charming (face) , Pirate (dance) , Pearly King (dance) and Snow White’s Prince (face) so it really does differ.

"They only want people between 20 and 25"
I was 18. Granted there weren't many of us this age and I was the youngest as my birthday is so late but we were still there and in the same job.


Thats all I can think of for now, I may do a post on what its like being there and accommodation etc, feel free to ask any questions in the comments and i'll do my best to reply